Last month I wrote about the time I spent learning under my daughter’s tutorship, the art of paper-piecing a quilt block. I was excited to begin the next block after she left on August 29th. Little did I know the drama waiting to unfold in my family would descend the very next day.

Scary symptoms were present when my husband awoke from a nap. I thought he had a stroke. I rushed him to the hospital ten minutes away and once in the ER he was triaged immediately. Thankfully it was not a stroke, but scary and life threatening nonetheless. With a heart rate of 160 (an irregular one as well), and a WBC in excess of 33,000, (indicating infection somewhere in his body), he was immediately put on antibiotics and heart medication, as well as oxygen. He remained in the ER four hours and was then transferred to ICU where he stayed for six days.

During that time, two procedures were performed. The first was a TEE, where a camera was inserted down his esophagus to see if any blood clots were present. None were seen so they went ahead with the second procedure called a cardioversion (they shock the heart), to reset his heart rhythm. It was successful.

He could have gone home the next day except he developed cellulitis in his right leg from the ankle to the knee. Each day it was progressively worse. They did more bloodwork and a CT scan, finally deciding on a single antibiotic which targeted skin infections. It worked. The following day we saw improvement but they wanted to keep him one more night to be sure it was working. On the eighth day of his hospitalization, he was released with prescriptions prepared to continue keeping his heart working properly and his leg healing. 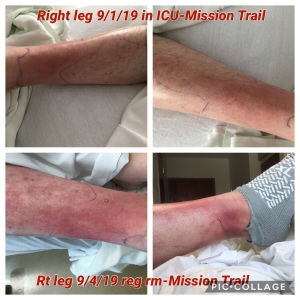 During this season of our life, I was forced to put many things on the back burner as I made Nick the central focus of my attention. His health was more important than anything I was involved in. The paper-piecing I had excitedly looked forward to was set aside. The final chapters of Legacy’s Path, Book Two in my Legacy Series, went unwritten. My newly acquired puppy was forced to spend many hours alone in between my back and forth daily hospital visits. I prayed, cried, hoped, and longed for Nick to be back home. One night I had a nightmare and he wasn’t here to wake me before it became terrifying.

I realize now it’s okay to put important projects on the back burner. It’s a way to triage the situation and focus on the urgent. Then slowly, as things improve, those back burner items which beckon me can be brought forward once again. Since my hubby came home I’ve written four pages of chapter 19 (with more to come), and spent many hours being entertained by my adorable Shih Tzu, Chai. Nick is still not fully strengthened, so other things will resume at a later time.

Life is seasonal and back burners can provide the safety net we need as God walks us through troubled times. I was fully aware of all the prayers offered for Nick and I by our family, friends, and even people we don’t know personally. God was with us the entire time and continues to uplift and strengthen me and heal my husband.

It’s true! I am a Certifed Teacup Indulgent. I have multiple China cabinets stuffed strategically with all shapes and sizes. There’s always room for one more. I love visiting estate sales, well, any type of sales where teacups might lurk. It’s a treasure hunt. I’m an avid reader, author, wife, mother, grandmother, and great-grandmother. I am active in my church, a member of American Christian Writers Association, Advanced Writers and Speakers Association, and Christian Writers of Southeast San Antonio. I am a Texas transplant from Michigan, and reside in San Antonio with my husband, Nick. View all posts by junesteacuptreasures

8 thoughts on “Back Burners”

This site uses Akismet to reduce spam. Learn how your comment data is processed.